Golf Clubs Made in the USA (info about PING) 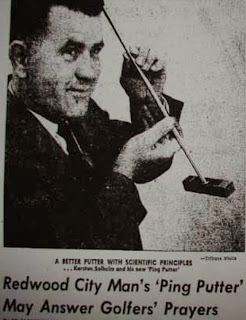 Over the last 25 years almost all production of golf clubs has been moved to China, Japan, and other locations overseas.  Most of the production was moved overseas to cut costs, but some was necessitated by EPA law which makes certain powder coatings, and titanium construction golf equipment impossible to make in America.

Informed consumers will find that PING (Karsten Manufacturing Corporation) is heavily American and manufactures more golf clubs in America than any other manufacturer.

Not only does PING make golf equipment in the USA but they also are the only family owned company of any well known manufacturer.  The other companies are all traded on stock exchanges and function with the primary goal of returning value to shareholders.  The company was started out of a garage in Redwood City, CA by Karsten Solheim.

Karsten was a GE Engineer, and he's responsible for revolutionizing the game more than any golf club maker in history.  He is the only club engineer in the Golf Hall of Fame. No matter which clubs you purchase, there is a technology/system being used that was initially created by Karsten Solheim, his son John, or the Karsten Manufacturing Corporation in general.

In the late 50's Karsten created the first perimeter weighted iron and heel-toe weighted putter.  In the 1970's and 1980's while the patent was in it's first 20 years it was very common for people to order PING equipment after seeing a PING ad and using the fitting chart that PING patented in 1966 to be measured at home.  Today 98% of the clubs on the market are perimeter weighted, but in the 70's if you wanted forgiveness in a golf club you could only buy it in PING Eye irons.  Karsten was the first "rocket scientist" to work on golf clubs, today if you aren't one you're probably not designing golf clubs.  I'm just getting started, and won't bore you with the long version but socially responsible consumers will find that buying PING isn't just an American thing, it's the right thing.  Sure, patents only last 20 years, but doesn't it make sense to purchase from the manufacturer that created the technology?  But lets get back on the main topic, which golf clubs are made in the US.

Today the only golf club foundry in America is in Dolphin, Arizona.  Karsten bought the foundry in the 1970's.  Watch this video tour of the foundry.  At that point the foundry could make all the golf clubs the American market needed.  As the other manufacturers lowered pricing by moving overseas, EPA laws changed, and production at Dolphin exceeded factory capacity PING started producing clubs overseas.  Today the Dolphin foundry employs tons of Americans who make PING equipment in Arizona at full capacity at all times.  This predominantly includes, replacement irons for loss, and overflow need of specific irons on an as needed basis.  Milled PING putters are all American made, and the grooves on the 2013 Tour Gorge wedges are milled in America.

There is a differentiation between the overseas production of PING and their counterparts.  PING owns their own plants in Japan and Vietnam.  The plants are run by a Solheim, and the employees are PING employees.  Some of those employees are American citizens, and have worked at the Arizona locations at some point in their career.  PING has extreme loyalty from both their consumers and their employees.  And yes, of course I play all PING.

PING has more club components produced in America than any other brand.  There are quite a few people with G10, G15, G20, or G25 irons out there completely made in America.

You could purchase a set of PING Eye 2 irons.  If you buy them online, get the serial number and confirm authenticity with PING by calling 1-800-4-PING-FIT.  Eye 2 and prior are all American, and you'll be supporting an American when you buy them second hand.

Take your irons to a PING fitter and ask to be fit.  Ask the fitter to recommend a new shaft, the old ones are too old but the heads are not!  Get fit for length, lie angle, flex, and grip.  You might have to pay for the fitting.  Then have your clubs sent to PING, to return them to new.  You can get the heads retumbled and they will look new when they come home.  PING Eye 2 irons from 80's-90's can only be adjusted 1-2 color codes so have someone help determine your wrist to floor measurement (don't do it yourself!!!!!!!!).  Once you know your measurement, buy your irons as close to that color code as possible.  Don't worry about which shaft is in there, you're going to have PING reshaft them.  Make sure to pick an American grip (not Golf Pride anymore).  Use PURE Grips, Tacki Mac, Star, or Mint grips for American made grips!

You should pay $40-175 for a set of PING Eye 2 irons.  Go to Golfsmith for a free 5 minute fitting and have them send the clubs back.  Reshafting with a new grip will cost $20-$50 per club depending on shaft.  Lie angle change will cost about $4 per club.  All of the work will be done at the Phoenix, AZ office.  You could be playing an all American club that is of extreme historical importance to golf for about $300.

With all that said, if playing good golf is your primary goal you really should not be playing irons from before the year 2000.  You can make any comment you want about how you play good with your dads old clubs, PING Man scientifically verifies that every club made is better than it's predecessors.  We are many years more advanced scientifically than we were 20, 30, 40 years ago.  Todays PING irons are better than any they've ever made.  Are you reading this on a 30 year old computer right now?  Would it even be possible?

Some other great major differences between PING and other brands:

Scotty Cameron Heads are made in the USA (shaft and grip are Chinese).

Scotty Cameron makes his popular putter heads in America!  Sure Scotty copies PING designs, but you can't take away the beauty that he brings to putters.  These are gorgeous putters that resemble artwork.  They even have a custom shop to focus on paint colors, and other personalizations that make your putter unique to you.  The grip and shaft to a Cameron come out of China.  The parent company for Titleist is FILA of South Korea.

Some Steel Shafts are made in the USA

That can't be all the clubs made in the USA can it?

No, it's not.  There are more.  There are a few small companies with some all American golf clubs.  TaylorMade, Callaway, Nike, Cleveland, Adams, and Mizuno assemble many of their clubs in America, from foreign parts.

Scratch Golf makes heads with our English friends over the pond and completes the work in Detroit.  "Housed in a secret location in metro Detroit MI, The Armory houses the most talented group of craftsmen in the game of golf and each one is tasked with making golf clubs specifically for YOU."  The President of Scratch Golf wrote about where his equipment is produced on GolfWRX in April 2010.

Sassy Malassy putters are machined in the Philadelphia area. The approximately $200 putters will come with a "Made in the U.S.A." headcover.

Dandy Putters are CNC milled out of a metal bar and include a True Temper American shaft with an American grip from Gripo's of Nevada.  Gripo's also makes grips in America for AME, known as Percise.

Prairie Golf says they mill some CNC putter heads in Omaha, Nebraska but they don't make each specific head clear.  I suggest asking them before purchasing if you are in doubt.

Louisville Golf will make you an all American hickory shafted persimmon wood head driver if you have a sense of adventure.

Please let us know about all the other great American small golf manufacturers out there!  Check out our article about American golf balls.  We also have an article for American golf tees and grips.

Posted by Philadelphia Patriot at 1:47 PM

Email ThisBlogThis!Share to TwitterShare to FacebookShare to Pinterest
Labels: Golf, Made in USA

Made in America Sites

We Pledge Made In USA