Golf Balls Made in the USA - Titleist & Bridgestone

For the 2014 season look to Callaway, Bridgestone, and Titleist to get golf balls made in the USA.


For the first time in it's storied history Titleist has started producing a large portion of their balls overseas, Thailand to be exact.  This move comes a few years after Titleist was purchased by Fila of South Korea.

Bridgestone has a commitment to produce balls at it's plant in Covington, Georgia. Bridgestone is headquartered in Japan.  Both companies are publicly owned.

Please read the side of the box to ensure you are buying American. Titleist balls sold in America are mostly manufactured at their 3 Massachusetts ball plants in Fairhaven, North Darthmouth, and New Bedford.

In April 2012 Bridgestone Golf announced that it would increase its golf ball production at its Covington, Georgia facility by 40% in 2012. As part of the plan for increased United States-based production, Bridgestone Golf will manufacture its popular TOUR B330-RX family of Urethane-covered golf balls in Georgia, beginning in June 2012. The production increase will necessitate the hiring of 20 additional full-time workers at the facility, 40 miles east of Atlanta.

In 2014 Bridgestone started an ad campaign promoting their increase in American production.  A commercial with David Feherty shows off the Covington, Georgia facility.  Bridgestone has produced balls in Georgia under the Precept and Bridgestone brands since the 1990s.

As of 2014, expansion at the plant in Georgia is complete.  This has allowed Bridgestone to move production of all of their premium models (13 models: B Series, e Series, & Lady Precept) to the states for 2014.  Prior generation models or product made prior to this transition might be foreign made.  Check the side of the box to ensure you're purchasing American!


The increase in production at the Covington plant comes as they celebrate an important milestone. In 2013, Bridgestone Golf completed manufacturing of the company’s 50 millionth dozen of golf balls. Since 1990, when Bridgestone began production of its golf balls in the United States under the Precept brand name, the company has produced more than 600 million golf balls at its Covington facility. If one were to line up 600 million golf balls side-by-side, the line of balls would cover 15,782 miles, stretching from Covington, Georgia to Tokyo, Japan and back.

Callaway and Taylor Made both produce some of their lineup in America.  Again it's important that you read the box carefully to determine if you are supporting American manufacturing and keeping more tax dollars and spending in the states! 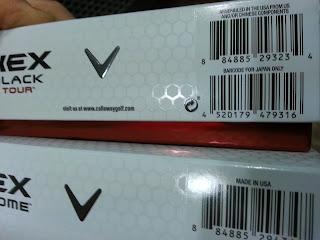 As you can see in these pictures we have the Taylormade Penta TP5 which has a urethane cover made in America and the ball is assembled in America.  4 of the 5 layers of the ball are made in South Korea.

Also pictured are two Hex balls from the 2013 Callaway lineup.  The Hex Chrome ball is a pure American ball, a good ball for all skill levels as well. As stated on the box The Hex Black Tour is "assembled in the USA from US and/or Chinese components."

That's it!  It's as simple as that for 2013 if you want to buy American, it's Titleist, some Bridgestone, and the Hex Chrome ball from Callaway as well.

There are websites claiming to be selling other brands of golf balls made in the USA. I have heavily researched every box, site, and golf product in the industry and find no reason to believe the following balls are manufactured in the USA:
Nike Power Distance, Callaway Hex Solaire, Callaway Hex Hot Pro, Nike 20XI, Nike Vapor Black.

Check out our article about golf clubs made in America.

See our article about golf balls made in America in 2013.
Posted by Philadelphia Patriot at 8:10 PM

Made in America Sites

We Pledge Made In USA